Playground injuries are the leading cause of injury to children in the childcare setting and to children, ages 5 to 14 years old in the school environment. More than 70 percent of playground equipment-related injuries involve falls to the surface and nine percent involve falls onto equipment. One of the most effective means of injury prevention has been the creation of safe environments for children through the building and/or renovation of playgrounds.

Since August of 2001 Injury Free Cincinnati has partnered with local agencies, businesses, schools, and volunteers from around Cincinnati to build and/or renovate 15 local playgrounds.

The CWFF Child Development Center is located in Avondale, Ohio, approximately one mile from Cincinnati Children's Hospital. This playgrounds lack of surfacing was a concern for community leaders and residents. On August 14th, 2010, the community rallied together to update and beautify this playground and the space around it. In addition to rubberized surfacing being added, the community washed and repainted the existing playground equipment and created murals to hang around the playground space.

On August 1, 2009, over 75 volunteers were recruited to build the 10th playground organized by Injury Free Coalition for Kids (IFCK) at Cincinnati Children’s Hospital Medical Center. This build included the installation of a rubberized surface to help prevent fall injuries. The major funder for the project was Kohl’s Department Stores, Kohl’s Cares for Kids Program.

This one-day community project was a family event that featured food, face painting, glitter tattoos, music, a juggler on stilts, carnival games and an inflatable slide making the day fun for all. This project allowed Price Hill residents, members of St. Lawrence Parish, The National Organization of Women in Construction (NAWIC), hospital employees and Kohl’s associates to work together and build a safe play space for the students of St. Lawrence School and the children living in the surrounding community.

Nearly 140 volunteers from across Greater Cincinnati gathered on Saturday, June 14, 2008 to build a new playground at Mayfield Park in East Price Hill. This is the ninth playground build organized by Injury Free Coalition for Kids of Greater Cincinnati (IFCK) at Cincinnati Children’s Hospital Medical Center and the first with the Cincinnati Parks Department. The major funder for the project was Kohl’s Department Stores, Kohl’s Cares for Kids Program.

The one-day community project was a family event that featured food, clowns, face painting, arts & crafts, music and fun for all involved. The project allowed Price Hill residents, city and hospital employees, nearly 40 Kohl’s associates and volunteers from the Avondale Youth Council, Quebec Heights School and University of Cincinnati to help build a community asset that will benefit children for years to come. The build day was made possible by the generous assistance of sponsors including The BonBonerie, Kroger, LaRosa’s, Inc., Starbucks, and United Dairy Farmers. Children enrolled in summer classes at a nearby elementary school, Quebec Heights, are excited about using the playground immediately. The equipment will be very useful during the summer and many of the neighborhood families will enjoy the brand new playground.

Nearly 140 volunteers from across Greater Cincinnati gathered on Saturday, June 23, 2007 to build a new playground at the Dunham Recreation Center. This is the eighth playground build organized by the Injury Free Coalition for Kids of Greater Cincinnati (IFCK) at Cincinnati Children’s Hospital Medical Center and the Cincinnati Recreation Commission (CRC). The major funder for the project was Kohl’s Department Stores, Kohl’s Cares for Kids Program.

The one-day community playground build project was truly a family event that featured food, fun and fellowship for all involved. The project was a great opportunity for Price Hill residents, CRC and hospital employees, nearly 50 Kohl’s associates and a host of others to help build a community asset that will benefit children for years to come. The playground is located behind the Recreation Center facility in the West Price Hill community of Greater Cincinnati. Children enrolled in the center's summer camp, kinder-prep and preschool programs will use the new playground the most. The equipment will be very useful during summer camp, when the staff has to keep children busy as they rotate the 170 campers through lunch shifts.

The Dunham playground is just a part of IFCK's expansion efforts in Price Hill and plan to help develop a safer place for children to live and play in this area.

On June 3, 2006, IFCK Cincinnati constructed its first community playground in Price Hill, our next focus community, in partnership with the Cincinnati Recreation Commission. A total of 110 volunteers from the hospital, twelve community organizations, and the Price Hill community helped make this build a tremendous success. The one-day community playground build project was truly a family event that featured food, fun and music for all involved. The 8th & Depot project was made possible through the generous assistance of Kohl’s Department Stores, our major sponsor, along with Cincinnati Children's Hospital, Calvary Episcopal Church, Santa Maria Community Services, the Lower Price Hill Community Council, and Oyler School. The new safe playground now includes a composite play structure, two waist-high grills, three additional benches, and electricity in the existing on-site shelter.

The playground is located at the corner of 8th & Depot directly across the street from Oyler School in the Lower Price Hill community of Greater Cincinnati. The site was chosen as the community residents felt it would enhance the school location, beautify the area, and give the children a safe place to play. With the new playground equipment and electricity, the site will be used for various community events in the future.

The new playground laid the foundation for IFCK’s expansion into Price Hill and plan to help develop a safer place for children to live and play in this area.

In September 2005, IFCK constructed the Haven Tot Lot with the generous support of Kohl’s Department Stores and over 60 volunteers from the Avondale and local community. The one-day project provided safe, new playground equipment and safety surfacing for children on and near Haven Street in Avondale. The new Haven Tot Lot emphasizes IFCK’s local mission to make Avondale a safer place for children to live and play.

One of IFCK’s most effective means of injury prevention has been the creation of safe environments for children through the renovation of playgrounds. Since 2000, IFCK’s goal was to build five safe playgrounds in Avondale and we accomplished our goal with the help of committed volunteers and community residents in May 2005. The Haven Tot Lot was essentially a bonus playground that we built as an added benefit to the Avondale community. To date, IFCK has completed six playgrounds in Avondale through partnerships with the Cincinnati Recreation Commission (CRC), community institutions and Avondale residents.

The Forest & Irving Park, completed in May 2005, marked our fifth community playground build. The major donor for this project was Kohl’s Department Stores and Kohl’s Cares for Kids Program. A total of 122 local residents from 10 different organizations throughout the Greater Cincinnati area, including approximately 35 students from Woodward Career Technical High School’s Building Technologies Program took the time to help build. Woodward students gained practical construction experience and had a tremendously fun time building a community asset. 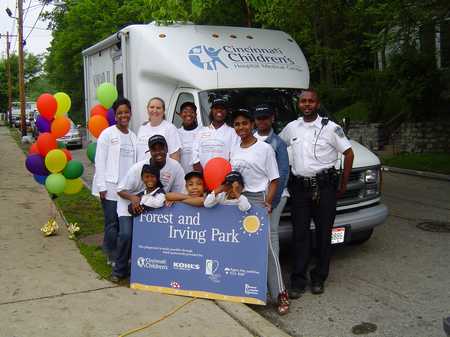 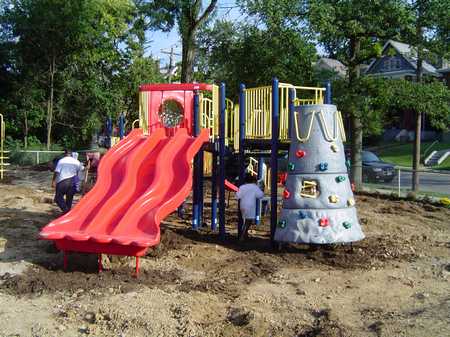 On Saturday, September 11, 2004, Cincinnati IFCK held its Fourth Annual Community Playground Build at the Martin Luther King Tot Lot in Avondale. This one day project engaged nearly 120 volunteers of all ages to build safe, new playground equipment and surfacing for the Avondale community. The build fostered a sense of community pride and a safe place for children and adults to gather for outdoor recreation.

The 2003 Allstate Little Hands Kids Dream Playground is located at the Hirsch Recreation Center. IFCK enlisted urban youth to plan and build a playground for themselves and their physically challenged peers. This hands-on endeavor culminated a kids’ dream playground and provided an invaluable learning experience in playground safety, the importance of handicap accessibility, project design and community building.

In June of 2002, Cincinnati’s IFCK kicked off the Avondale Kwanzaa Playground with the help of the Allstate Foundation, local sponsors and Avondale residents. Today, the playground features fun equipment, a safety surface and custom Afro-centric accessories that were designed to celebrate the seven principals of Kwanzaa. In addition to building a playground, the volunteers also planted a garden around the area and included eccentric benches and artwork throughout the site. The artwork consists of custom stepping stones, benches, a mural and community garden. The Kwanzaa theme celebrates unity, self-determination, collective work and responsibility, cooperative economics, purpose, creativity and faith. 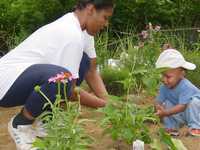 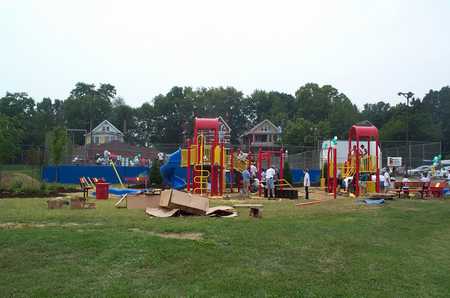 Like other IFCK programs throughout the country, we decided to construct playgrounds within the two high-risk communities of Avondale and Price Hill to provide children with a safer environment to play. With a generous donation from Cincinnati Children’s Hospital Medical Center and the Division of Emergency Medicine, our first playground was constructed in August 2001.


This successful project not only created an exciting new playground site, but offered a sense of shared ownership and responsibility among residents. The playground was dedicated to William DeHart Hubbard, a Cincinnati native and the first African American to win an Olympic gold medal.

Can you please include attachment #2 in the full description above the "St. Lawrence Playground" heading

I removed the picture previously located above the "Haven Tot Lot" section in the full description to make room for the new attachments.

The pictures that are currently displayed in the "NPO/Site Only Info" of the Playground section can be removed. Thank you

Back to Cincinnati
Main Page