The smart teen driving program has provided opportunities for teens to create safe driving messages and participate in awareness activities, and has offered parents, health professionals, educators and government officials the chance to learn more about what they can do to help teens be smarter drivers and passengers. Past and current opportunities for teens include:

Safe teen driving classes/workshops continue to be available to local schools through Pediatric Trauma and the Monroe county Office of Traffic Safety. The program has evolved through the years but was based on the original Drive for Life program collaboratively developed under the Allstate Smart Teen driving program. The parent/teen driving contract continues to be available.

Truth & Consequences: This program, is brought to schools and community organizations. It is designed to educate on how poor choices through distraction and inexperience can lead to tragic outcomes. Traffic safety specialists discuss risky driving behaviors, the physics of reaction and stopping times, current laws on graduated driver’s licenses (GDL) and other alternatives to many peer-pressure related scenarios. Health care professionals discuss the physical effects of trauma on the body and the realities of a trauma resuscitation, hospitalization and rehabilitation.

Drive for Life: This 2 hour trauma workshop is the “in hospital” version of Truth & Consequences and is held as requested in the Emergency Department. This program gives teens a glimpse into what happens after a motor vehicle crash from a medical standpoint, beginning with a detailed crash simulation, a 911 call, a visit to the trauma unit, to hospitalization and finally rehabilitation. The workshops have been very successful with positive reviews.

My Car Your Life: Was a program that targeted the almost-driver or “pre-driver”. The movie The Fifth Quarter, was reviewed and stopped at various points and to discuss its impact. This was used to promote being a good passenger and to teach teens how they can have an impact on what happens in a car.

Rides for Life: Rides for Life was a drive in style car show that included a teen drive-in style event as part of a car-show (teens would bring their own wheels and show them off) and part safety fair (stations featured simulated roll-overs, impaired driving demonstrations, driving simulator and hazard obstacle courses). This event was held from 2006 to 2011.

Teen/Parent Driving Contract: A driving contract is available online. It was also included in a teen packet distributed to all new teen drivers. This contract helps start the conversation between parents and new drivers as to how to be a smart driver.

This was a collaboration between the University of Rochester Medical Center, Monroe County, the City of Rochester, Allstate and more. this interactive event, included multiple stations, addressing topics such as: What to do if you are involved in a crash?, How to change a tire or your oil?, The dangers of distracted driving, Taking a pledge against texting and driving, State Police rollover simulator, An ambulance “open house”, An opportunity to experience the view from a semi or rig, Sharing the road with cyclists and much more. There was also a battle of the belts - a seat belt competition/race between teams of teens. WPXY had a live broadcast.

Roc Roadeo, a follow up to the Young Roc Roadeo was held in 2015 with similar events. In 2017, we expanded the event to include multiple injury prevention topics and called it Injury Free Safety Day

In 2013, Allison created the following poster to distribute in her school.

Traffic Teens, the teen advisory board from 2009-2011, created a Facebook group called Traffic Teens. Their message was to remind everyone to wear a seatbelt along with educating about distracted driving. They also created several giveaways to promote their message. One was an awareness bracelet to remind people to wear seatbelts and the other was a bumper sticker/magnet. Even though the advisory board has ended we continue to provide the program/awareness materials as part of our program.

The first teen advisory board in 2008 created a Facebook group, TEAM Awesome (TEAM stands for Texting Endangers All Motorists). They also designed a window cling for their peers to be distributed throughout the county at places where teens meet. Link to image of window cling: Smart Teen Driving Window Cling

Sports Venue: Up through 2017, we promoted a smart teen driving message at our local AAA baseball field, Frontier Field. Long Ball Landing, located just behind the outfield fence provides safety materials to the lucky visitors. A billboard above the fan zone area had a new safety message each year that was up for a portion of the year as well as game day announcements.

During the 2011-2012 school year, a teen from Webster Thomas High School chose teen smart driving as her senior project. She worked on our teen smart driving program as both an actor and with the concept for our awareness video and created a web ad shown here; http://bit.ly/IMqoSc 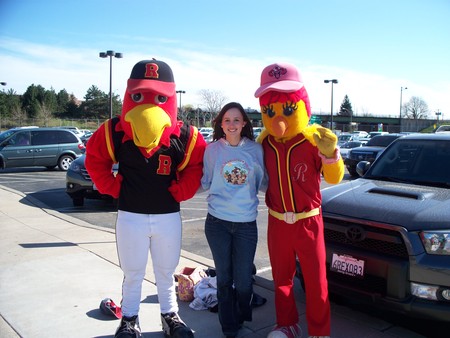 Poster contest: While a senior at Aquinas Institue, Kelley created the winning poster design for the smart teen driving poster contest. Her creation has been printed and is available for distribution.

For more information about this program please contact Karen Knauf at karen_knauf@urmc.rochester.edu

For more information on these events, contact Karen Knauf at Karen_Knauf@URMC.Rochester.edu.

Back to Rochester
Main Page